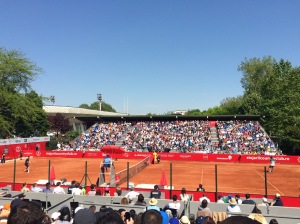 This post was supposed to come a long time ago. It was also supposed to describe the matches I saw in the second part of my visit at the tournament. Instead of mentioning scores and statistics I will do this.

I’ve been going to the ATP tournament since 2002. The only year I missed it was the year where I was preparing my Master’s admission exam. That year I made it to the gates, wanted to go in, hesitated and left. This year I spent the last days at the tournament (Friday-Sunday) enjoying tennis and thinking back. It was a pleasure to see the Spaniards playing in Bucharest again, though during the same time there was also a tournament in Barcelona. Thank you Guillermo Garcia-Lopez and Fernando Verdasco, what a pleasure it is to watch Spaniards play on clay. It was also a pleasure to see Lucas Pouille reach his first ATP final.

It was a thrill to see the Romanians play, Florin Mergea and Horia Tecau gave me another chance to attend a near heart-attack match. Than it wasn’t a pleasure to see the finals canceled because of the rain, and miss the last ever finals of the tournament because they got rescheduled for the day when I had my flight back to Sweden.

Even so, as always, on some days I got sunburnt. And as always, on other days I froze. And on all days I enjoyed the tennis. I missed the finals ceremony, I missed “Stand Up for the Champions”, I missed saying a proper goodbye to an event that has been a landmark for my tennis-fan existence. But among all the missing I will miss the tournament the most. The beautiful park, the players, the umpires, the beautiful arena, as old and as shabby as it is, and the sound of the ball on the home clay. For this year I say: game, set match Fernando Verdasco, Florin Mergea/Horia Tecau but after all these years the winner is me. Cause that was where I discovered tennis on a warm September afternoon when I saw Felix Mantilla play against Juan Antonio Marin.