As a 555th anniversary celebration, the capital city of Romania offered its inhabitants quite a few activities. It is impressive how the traditional barbecues & beer have slowly been replaced with pleasant cultural activities suited for all public. The possibility of actually choosing what to attend made me spend a whole week-end out and about in the city. This has happened quite a few days ago, sorry for the delay but this is what I found around town on its anniversary.

First stop for me was a very awesome concert given by some of the best rock bands that you can listen to on the local musical landscape. I was particularly happy to see Les Elephants Bizzares, Luna Amara, Omul cu Sobolani and Alternosfera. Too bad each band could only play for half an hour but oh my, I was so impressed by the way they sound. Huge evolution for Romanian bands, true artists, entertainers and, occasionally, social & political advisers. If only more people could actually listen to their songs and really understand what they’re about. The good thing about this concert was that the audience was formed of the coolest people you could see around. I was impressed by the large number of kids in their teens that chose to come to this concert and also by the parents that brought their 4 years old children (wearing protective headphones). I was also amused by the the fact that, even if the concert was in a public square where no alcohol was sold, everybody had a beer in their hand.

I believe the non-stop shop from around the corner made a lot of money that evening. Of course there was another concert (there were more actually) where pop artists old and new were entertaining the crowds but I simply chose to ignore playback and go for some heavy live sounds. I am still impressed by the way Alternosfera sound live and can’t wait to see them again. The other bands I’ve already seen before and I knew what they were capable of. Give any of the 4 bands a try, some have songs in English as well, they are worth it! 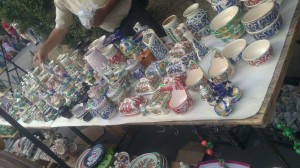 Second stop was on Saturday when I took a look at some cultural activities taking place in a park (Cismigiu). Caught some traditional folk dancers, some costumes parade, flower fight and traditional products fair. I also fought packs of people, it was very, very crowded and I soon ran out of patience. That was when I went to another concert: Folk You Gala. I spent the evening listening to Romanian folk music with a personal highlight in the performance of Ducu Bertzi who is absolutely amazing. Also it was very fun how at the changeover between artists everybody was singing along to karaoke songs projected on big screens.

Last day of celebration was spent walking around town. My interest was to get my hand on some very delicious kürtőskalács (chimney cake) sold at the fair and to visit a yard sale that had nothing to do with the celebrations. Also with no link to the celebrations I also ran into a flea market selling anything from clothes, jewels to antiques and candy.

It was quite nice I can say, I really wanted to attend more activities (street dancing, theater etc) but in the end I chose what I love the most: music. I wonder what I would have chosen if they had tennis as well.

Rock concerts & tennis.
View all posts by Diana →
This entry was posted in Day to Day, English. Bookmark the permalink.