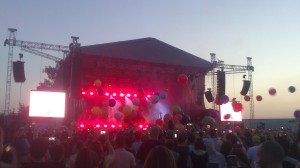 Summer time means, among other things, lots of concerts in the great outdoors. These outdoors can be in the middle of town squares, on the beach, outside on the field, by a forest or in a hot parking lot behind the building you are working in.

First stop for me this Summer was Thirty Seconds To Mars. I almost didn’t make it to this concert but in the end I was there to see them. I knew that their concerts were spectacular and that they are known to sound good live, they are not on the list of artists that I listen to on a regular basis but their songs end up in my playlist quite often.

I must say that the organization was ok up to one point where there are always problems: the extremely long lines for the coupons for the drinks and the shorter but still quite long lines that you had to battle to enjoy a cold beverage. However nothing mattered after the concert started. 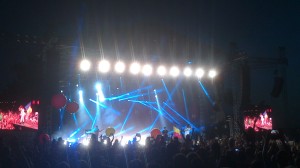 Being the concert of a mainstream band meant that there was a wide range of people in the crowd and I swear some really didn’t belong at a rock concert. But I’ll stop with being mean right here, at least for some good minutes they were listening to some really good music. In the end nothing mattered: I have no idea when the concert reached its end. It was a back-and-forth journey between music and Jared Leto acting like a clown or, most of the times, a very charismatic and charming front man.

I sure hope more great bands make Bucharest and Romania a permanent and constant stop in their touring. The Romanian crowd is still pretty keen to see artists perform live under their eyes.

Rock concerts & tennis.
View all posts by Diana →
This entry was posted in Day to Day, English, Music Stuff. Bookmark the permalink.